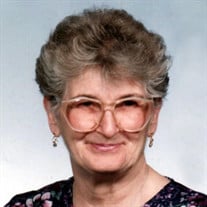 RICHMOND, Ind. – With heavy hearts, we announce the passing of the matriarch of our family, Jean B. Cox Wilkins. She passed Sunday, October 3, 2021, at home with her family. Jean was born in Birmingham, England, on November 21, 1930, to Alfred Charles and Kezia Smith Foley. On September 24, 1949, she married Peter O. Cox and they had four daughters. In September of 1967, Jean, Peter, and their four daughters emigrated to the U.S. She was a homemaker and did volunteer work. Jean enjoyed sewing, knitting, dancing, and gardening. Most of all, she loved to travel and had been all over. Jean was always up for an adventure. Survivors include her husband and partner of 24 years, Stanley B. Wilkins; daughters, Lesley (Victor) Mullins, Martine McPeak, and Frances Hall, all of Richmond and Stanley’s daughters, Stacey (Scott) Jordan of Safety Harbor, Florida, Susan Luedike of Portland, Indiana, and Karen (Isaiah) Wilkins of Winchester, Indiana; grandchildren, Victoria (Darin)Winters of West Chester, Ohio, Shawn (Amanda) Agee, Kris (Lisa) Agee, and Olivia (Byron) Isley, all of Phoenix, Arizona, Amanda Mullins, Nicole Worley, Peter Shaw, and Britany McPeak, all of Richmond, Angela (Jimmie) Mullins of Corbin, Kentucky, and James (Danielle) Isley of South Carolina; many great-grandchildren; nieces; nephews; and friends. She was preceded in death by her first husband of 43 years, Peter O. Cox, who passed February 26, 1992; daughter, Patricia Isley, who passed December 12, 2005; parents; and siblings, Margaret Joy Foley Cox and Charles Alfred Foley. A Celebration of Life for Jean B. Cox Wilkins will be held by the family at a later date. Arrangements are being handled by Doan & Mills Funeral Home, 790 National Road West, Richmond. Memorial contributions may be made to: Reid Foundation for the Hospice Program, 1100 Reid Parkway, Richmond, IN 47374. Condolences may be sent to the family via the guest book at www.doanmillsfuneralhome.com.

RICHMOND, Ind. &#8211; With heavy hearts, we announce the passing of the matriarch of our family, Jean B. Cox Wilkins. She passed Sunday, October 3, 2021, at home with her family. Jean was born in Birmingham, England, on November 21, 1930,... View Obituary & Service Information

The family of Jean B. Cox Wilkins created this Life Tributes page to make it easy to share your memories.

RICHMOND, Ind. – With heavy hearts, we announce the passing of...