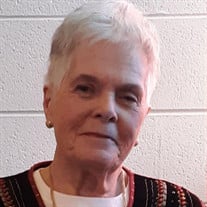 RICHMOND, Ind. – Jane E. Vincent, Ed.D., R.N., Professor Emerita, age 85, of Richmond, Indiana, passed away on Tuesday, October 26, 2021, at Reid Health after a brief illness, surrounded by her loving family. Born November 23, 1935, in Terre Haute, Indiana, to Charles E. and Esther Fienning Youngflesh, Jane was a 1953 graduate of Richmond High School and enrolled in the nursing program at Indiana University (IU), beginning an academic pursuit that would occupy the rest of her life. She graduated from IU with a Bachelor of Science degree in 1957 and went on to earn her master’s degree in psychiatric nursing in 1980, before earning her Ed.D. in education administration from Ball State University in 1991. Jane was a devoted nurse and educator. She was a General Clinical Nurse from 1957 - 1974, a Lead Instructor at Ivy Tech from 1974 - 1979, and the Assistant Director of Education at Richmond State Hospital from 1979 - 1980. Jane joined the faculty of Indiana University East in 1980 as Assistant Professor of Nursing and retired in 2000. Upon her retirement, she taught graduate nursing courses at Indiana Wesleyan. Jane left her mark on generations of nurses and nursing teachers over a 35-year teaching career. She is recognized locally and throughout the state for her leadership in nursing education. Jane loved challenging students to think for themselves and helping other teachers to do the same. She educated and mentored thousands of nurses throughout their careers. Jane was awarded the 1992 Educator of the Year Award from the Richmond Chamber of Commerce, the 2000 Distinguished Service Award from the IU School of Nursing Alumni Association, the 2002 Lifetime Achievement Award in Nursing from IU East, the 2014 IU East Chancellor’s Medallion Award, an IU East Faculty Colloquium on Excellence in Teaching Award, the IU East Helen Lees Award, and an IU East Teaching Excellence Recognition Award. She was inducted into the IU President’s Circle in 2018. Her impact on her field and community could be acutely felt at the end of her life, as Jane was lovingly cared for by many of her former students and mentees. She was a tireless servant leader. Her passion was to encourage quality of life for families and caregivers of Alzheimer’s patients. In 1980, Jane organized and facilitated the first Alzheimer’s support group in Indiana, a commitment she maintained for over 20 years, impacting countless lives in the region and beyond. Jane was the first woman to serve on the Reid Hospital Foundation Board of Directors, also serving as chair. In 2002, her contributions to her community and state were recognized when she was named the recipient of the Sagamore of the Wabash by Indiana Governor Frank O’Bannon. Jane was a lifelong Christian and member of First English Lutheran Church, where she raised her four children in the First English community. Jane was a member of Bible Study Fellowship, Collegiate Club, and P.E.O. (Chapter AU), having just recently served as president. She was a lifetime member of the Richmond High School Alumni Association and received the 2002 Distinguished Alumni Award. Jane was a very kind and positive woman who always took time to listen and help others with her encouraging ideas. She was a loving wife, mother, and grandmother, always so proud of her family. Friends and family will remember Jane for her culinary creations, delicious baked goods, warm hospitality, and a clever sense of humor. Jane’s legacy will live on in the hearts of her family and many friends, nursing students, and colleagues. Survivors include her children, Sarah (Donald) Braxton of Huntingdon, Pennsylvania, Michael (Jennifer) Vincent of Swarthmore, Pennsylvania, Rachel (Joseph) Etherington of Richmond, and Jeremy (Kimberly) Vincent of Richmond; Vietnamese sponsored sons, Hai (Ellie) Tran and An (Tan) Tran, both of Richmond; grandchildren, Sam (Glynis) Braxton, Grace Braxton, Laurel, Virginia, and Johanna Vincent, Esther Etherington, Lily and Henry Vincent, Hong Davis, Brien, Jessica, and Robert Tran, Alunee Tran, and Autida Bowling; host family grandson, Alex (Kristina) Topalovic; sister, Joan Kuipers; and brothers, Jim (Doreen) Youngflesh and Jay (Michal) Youngflesh. She was preceded in death by her husband of 59 years, Wayne Estel Vincent, who died December 17, 2017; grandson, Theodore Braxton; and parents. The Vincent family is grateful for the loving care provided by the entire Reid staff. A memorial service for Jane E. Vincent will be at 1:00 p.m. Saturday, November 20, 2021, at First English Lutheran Church, 2727 East Main Street, Richmond. A reception will follow. Pastor John Walker and Pastor Chip Belanga will be officiating the service. The Nurses Honor Guard will perform the Nightingale Tribute during the service. Entombment will be in the First English Lutheran Church Columbarium. Arrangements are being handled by Doan & Mills Funeral Home, 790 National Road West, Richmond. In lieu of flowers, memorial contributions may be made to: IU East Nursing Fund, c/o IU East Office of Gift Development, 2325 Chester Boulevard, Richmond, IN 47374 or First English Lutheran Church, 2727 East Main Street, Richmond, IN 47374. Condolences may be sent to the family via the guest book at www.doanmillsfuneralhome.com.

The family of Jane E. Vincent created this Life Tributes page to make it easy to share your memories.