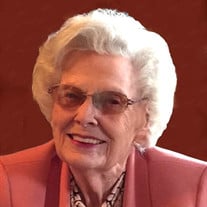 RICHMOND, Ind. – Mrs. Jane Woolley McCrea, age 103, of Richmond, Indiana, died Saturday, June 20, 2020, at Friends Fellowship Community, where she had lived for the past four years. Born January 19, 1917, in Richmond, Indiana, to Ruford Horton and Mary Davis Woolley, Jane was a life-long resident of Richmond. She attended Dennis Junior High School, where she participated in track and field, baseball, and the Dramatics Club. Jane was written into Dennis Junior High’s “Book of Fame” during her ninth-grade year. This award was given to one boy and one girl in each grade based on points gained in scholarship, citizenship, activities, health and vigor, and personality. She graduated from Morton High School, where she continued to be active in sports and Dramatics Club. In her senior year, Jane was Class Secretary and participated in the Senior Play. She was also Morton High School’s Senior Prom Queen in 1935. Jane graduated from the International Business College in Fort Wayne, Indiana, in 1937. She then returned to Richmond to work at Natco. In 1942, Jane married Allan B. McCrea. During the next three decades, she and Allan raised their family. Jane served on the Richmond Art Museum Board of Trustees from 1975-1983. During that time, the board created educational programs such as “Art is…” which today serves nearly 1,800 children in K-3rd grade. The RAM Endowment was also started in 1980 with a goal of $80,000. Today, the endowment is nearly $1.2 million. Jane and Allan were members of First Presbyterian Church in Richmond. Both were avid golfers, and they traveled all over the country to play different courses. Jane was an avid reader and a member of Magazine Club for several decades. She also spent countless hours creating beautiful needlepoint pillows and ornaments. Each summer Jane turned bushels of apples into delicious applesauce, which her entire family enjoyed throughout the year. After her husband’s death in 2001, Jane created the Allan B. McCrea Memorial Scholarship Fund at IU East, which provides scholarships for Wayne County students attending IU East. She enjoyed meeting the students and learning about their career aspirations. Survivors include her children, A. Scott (Carol) McCrea of Indianapolis, Indiana, Mary (Jim) McCrea Simkins of Greenville, South Carolina, and Bruce H. (Katherine) McCrea of Nashville, Tennessee; grandchildren, Chris McCrea, Ryan McCrea, and Claire McCrea Tuschong, all of Indianapolis and Catherine McCrea Simkins of Greenville; and eight great-grandchildren. The family wants to express their sincere appreciation to Melissa Toschlog for years of excellent care giving and close friendship. Memorial service for Mrs. Jane Woolley McCrea will be held at 2:00 p.m. Friday, June 11, 2021, at Doan & Mills Funeral Home, 790 National Road West, Richmond, with Pastor LydiaGrace Gray officiating. A private, family burial will be in Earlham Cemetery. In lieu of flowers, memorial contributions may be made to: Richmond Art Museum, P.O. Box 816, Richmond, IN 47375; Allan B. McCrea Memorial Scholarship Fund, c/o IU East, 2325 Chester Boulevard, Richmond, IN 47374; or First Presbyterian Church, 100 North 10th Street, Richmond, IN 47374. Condolences may be sent to the family via the guest book at www.doanmillsfuneralhome.com.

The family of Mrs. Jane Woolley McCrea created this Life Tributes page to make it easy to share your memories.