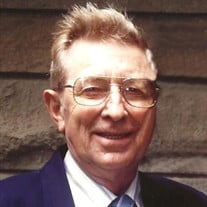 RICHMOND, Ind. – James L. Jackson passed away early Monday morning, February 1, 2021, 20 years exact to the date of his beloved wife, Irene Bond Jackson’s passing. He died from COVID-19 while in the warm care of Reid Health’s hospice workers. Jim was born August 29, 1927, to Richard C. and Lucy Alice Cheek Jackson, in a cabin above the Laurel River near London, Kentucky. He grew up on the tenant farm his family cultivated, leaving at the age of 14 to work for the railroad as a section hand (track builder). He joined the U.S. Navy at the age of 17, fighting in the Pacific Theater during World War II. In 1946, Jim made his way to Richmond having delivered a man’s car from London, Kentucky. Not having a direct way home and seeing an opportunity in the bustling town, Jim took up short residence at the downtown YMCA. He soon met his wife-to-be, and they were wed in a double ceremony with Irene’s sister, Cora Mae, and her fiancé, July 3, 1948, at the Justice of the Peace in the Wayne County Courthouse. Family was his greatest pleasure. He had two daughters that he adored immensely, Carolyn (Robert) Farmer of Greenfield, Indiana, and Marilyn Jackson of Richmond. He also had six grandchildren, Tabatha (Tom) Wissel of Richmond, Kristi (Chad) Reedy of Fairland, Indiana, Adrienne (Kevin) Hash of Manassas, Virginia, James R. (Sara) Farmer of Unionville, Indiana, Brad (Elizabeth) Rosser of Connersville, Indiana, and Erin Bowman of Manassas and 15 great-grandchildren. He is survived by his beloved brother, Roy L. Jackson of Winchester, Kentucky, and many nieces, nephews, cousins, and friends. Jim worked in the factories of Richmond, eventually having a long career as an over-the-road truck driver for Richmond Casket and Dunham Lehr. In 1976, he co-founded B.J. Cabinets and Tops with his daughter, Carolyn, and son-in-law, Robert Farmer. Jim retired from full-time work at B.J.’s in 1989, staying on as a part-time truck driver for several years thereafter. He continued his driving career with Flowers By Carla for another decade or so, not actually retiring until in his early 80s. Jim loved the road and getting behind the wheel! Jim had a gregarious personality, a big laugh, a contagious smile, and he never let the facts get in the way of a good story. Jim knew the roads and highways throughout the U.S. so well; he was the family’s personal Google map, before Google Maps existed. If you were lost in the middle of Wyoming, just give Grandpa a call because he probably delivered farm machinery there at some point in time and could tell you how to get home. Jim was an enthusiastic sports fan, loving UK Wildcat men’s basketball and Cincinnati Reds baseball. He was an ardent reader of fiction and a prolific gardener, loving fresh tomatoes. Jim always enjoyed a good meal with family and friends, frequenting Sunshine Café and Frisch’s, until recently. He was a lifetime member of VFW Kirk-Little Post 1108 and former member of American Legion Harry Ray Post #65, meeting friends and family at the VFW for breakfast. Jim was an avid bowler and frequented 40 Lanes many days and nights of the week. He and Irene would think nothing of driving across the country for a bowling tourney, with Reno, Nevada, being a favorite spot. While scoring a perfect game when he was in his late 60s, his greatest bowling feat probably came in bowling a 600 at the age of 93. He was preceded in death by his first wife, Irene Bond Jackson, to whom he was married for 53 years; his second wife, Phyllis (Wickett) Jackson; parents, Richard and Lucy Jackson; sisters, Allie Lee Jackson and Jewell Sizemore; and brothers, Donald, William, and Thomas Jackson. James L. Jackson will undoubtedly be missed by his family and friends. He lived a great life, full of adventure, love, compassion, family, friends, perseverance, success, and inspiration, having the opportunity to live out the American dream. Due to the current COVID-19 situation, we regret that services for James L. Jackson will be private. Burial will be in Goshen Cemetery with military honors provided by the Wayne County Honor Guard. A celebration of Jim’s life will be held this summer. Arrangements are being handled by Doan and Mills Funeral Home, 790 National Road West, Richmond. In lieu of flowers, memorial contributions to Girls Inc. of Wayne County, 1407 S. 8th Street, Richmond, IN 47374 are greatly appreciated. Condolences may be sent to the family via the guest book at www.doanmillsfuneralhome.com.

The family of James L. Jackson created this Life Tributes page to make it easy to share your memories.