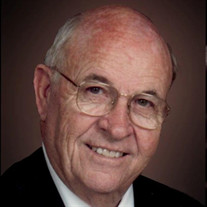 RICHMOND, Ind. – James H. Gilmore, age 85, of Richmond, Indiana, passed away peacefully following a short illness Monday, July 26, 2021, at his home. Born December 8, 1935, in Richmond, Indiana, to Clarence and Helen Downing Gilmore, Jim lived in Wayne County, Indiana, most of his life. He graduated from Webster High School in 1954. Jim was in the U.S. Army and served in Germany in 1955. He retired as a manager at Koorsen Protection Services. Jim previously worked at Avco and was involved in sales at Cronk Fire & Safety and the Palladium-Item, where he was also the head of circulation. Jim was a charter member of the Webster Fire Department, serving as chief in 1988, and had been the Webster Township Trustee for many years. He was also a member of Centerville Christian Church, but had recently been attending Hillcrest Baptist Church. Jim was active in the former Richmond Area Emmaus Community. He enjoyed watching IU basketball, traveling, and eating out with his friends. Survivors include his daughter, Sandy (Todd) Kiracofe of Eaton, Ohio; granddaughter, Raegan Prater; sisters-in-law, Ruth McKee and Kathy Gilmore; brother-in-law, Ron (Joyce) McKee; nieces; nephews; and many friends, including his girlfriend, Eula Earl. He was preceded in death by his wife of 55 years, Phyllis Darlene McKee Gilmore, who died February 24, 2011; son, Rodney Gilmore, who died in 1992; parents; and siblings, Doris Dallas, Phyllis Mills, Marilyn Weller, and Lowell Gilmore. Visitation for James H. Gilmore will be from 5:00 to 8:00 p.m. Thursday, July 29, 2021, at Doan & Mills Funeral Home, 790 National Road West, Richmond. Funeral service will be held at 12:00 p.m. Friday, July 30, 2021, at Doan & Mills Funeral Home with Pastor Martin Holman officiating. Entombment will be in the Earlham Memorial Mausoleum. Memorial contributions may be made to: Hillcrest Baptist Church, 3469 Hillcrest Road, Richmond, IN 47374 or Muscular Dystrophy Association - WEB, P.O. Box 97075, Washington, DC 20090-7075, in honor of his son, Rodney. Condolences may be sent to the family via the guest book at www.doanmillsfuneralhome.com.

The family of James H. Gilmore created this Life Tributes page to make it easy to share your memories.