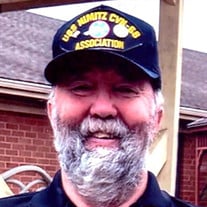 RICHMOND, Ind. – James M. Disney, age 74, of Richmond, Indiana, died unexpectedly Friday, November 27, 2020, and went to be with the LORD. Jim was born on October 22, 1946, in Anderson County, Tennessee, to Grace Disney and raised by his mother and stepfather, Bob Clements, and later, Bill Wright. He graduated from Richmond High School in 1966. Jim served seven tours of duty in the U.S. Navy during the Vietnam War. He retired at the age of 50 from GTE, where he worked as a telephone installer maintainer. Following retirement, Jim became a Veterans Service Officer for 10 years. He was instrumental in establishing the first veterans’ clinic in Wayne County, Indiana, and helping secure land for Veteran’s Memorial Park in Richmond. Jim served as the chaplain for American Legion Harry Ray Post #65, Vietnam Veterans of America (VVA), and VFW Kirk-Little Post 1108. He ministered at the VVA wall when it came to Whitewater, Indiana, and Richmond. Jim was a licensed minister, who performed many weddings and funerals. He was also a volunteer fireman for the Boston Fire Department for 10 years. Jim was thrilled to be Richmond High School’s mascot rooster, “Big Red”, at basketball games in the old Civic Hall. He could even do backflips! Jim was a member of the Wayne County Honor Guard. He belonged to the Journey Life Center, Emmaus Community, Point Man Ministries, and Men and Women of Action. Jim was a great speaker and had played Jesus three different times. He loved traveling with his wife, Verna. Together, they traveled to Okinawa, Korea, Sardinia, Rome, Niagara Falls, and almost all 50 states. Jim enjoyed bowling, shooting pool, and playing horseshoes and cornhole. He invented a zipline, which he lovingly referred to as “the swing”. Jim was a wonderful husband, dad, grandpa, uncle, and friend, who will be missed by all. Survivors include his wife and best friend of 42 years, Verna Disney; son, Kurt (Sonja) Disney of Sarasota, Florida; stepsons, Chuck (Chun Hui) Ruhl of Riverside, California, Chris (Linda) Ruhl of San Leon, Texas, and Tim (Misty) Thomas of Connersville, Indiana; 14 grandchildren; three great-grandchildren; half-sisters, Janie Wright of Florence, Arizona, and Anita Caldwell of Richmond; stepsister, Rhonda Ainsle of Tacoma, Washington; stepbrother, Billy Wright of Arizona; nieces; nephews; cousins; and many friends, including special friends, Bob Clark and Janet Wyatt. He was preceded in death by his mother, Grace Wright; half-brother, John Earl Wright; and stepfathers. The family would like to thank the staff in the Heatherwood Department of the Wood Glen Alzheimer’s Community in Miamisburg, Ohio, for the excellent care they gave to Jim over the past 1 ½ years. Due to the current COVID-19 situation, we regret to inform you that services for James M. Disney will be private with Pastor Michael Stonebraker officiating. The funeral service will be livestreamed at 11:00 a.m. Thursday, December 3, 2020, on the Doan & Mills website. Burial will be in Glen Haven Memorial Gardens with military honors provided by the Wayne County Honor Guard. Arrangements are being handled by Doan & Mills Funeral Home, 790 National Road West, Richmond. Condolences may be sent to the family via the guest book at www.doanmillsfuneralhome.com.

The family of James M. Disney created this Life Tributes page to make it easy to share your memories.