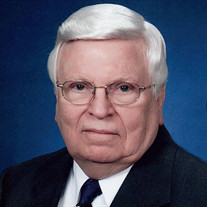 RICHMOND, Ind. – Jack M. Hatcher, age 92, of Richmond, Indiana, died Wednesday, July 21, 2021, at home surrounded by his family. Jack was born March 4, 1929, in Muncie, Indiana, and moved to Richmond in 1959. He graduated from Center High School in Perry Township, attended Ball State University, and received a bachelor’s degree from Purdue University. Jack served in the U.S. Army during the Korean War. He retired as the owner/operator of CMJ Corporation and formerly worked as an engineer at Avco. Jack was a member of Central United Methodist Church. He was also a member of the Richmond Masonic Lodge No. 196, F. & A.M., Indianapolis Valley of Scottish Rite, and Indianapolis Murat Shrine. Jack’s faith was very important to him, and he enjoyed participating in a local men’s Bible study every Monday night. Jack loved spending time with his family, and he always put them first. Jack was especially proud of his grandchildren. Survivors include his daughter, Susan (Tim) Miller of Richmond; sons, Michael Hatcher of Sewickley, Pennsylvania, and David (Jennifer) Hatcher of Lewisburg, Ohio; grandchildren, Lauren Hatcher, Lindsay Hatcher, Haley Miller, and Jake Miller; and many friends. He was preceded in death by his wife of 66 years, Loretta Ruth Harris Hatcher, who died September 16, 2017, daughter-in-law, Cindy Hatcher; and parents, George E. and Hazel Marie Barkman Hatcher. A private service will be held for Jack M. Hatcher with Pastor Phil Carder officiating. Private burial will be in Earlham Cemetery with military honors provided by the Wayne County Honor Guard. Arrangements are being handled by Doan & Mills Funeral Home, 790 National Road West, Richmond. Memorial contributions may be made to an organization of the donor’s choice. Condolences may be sent to the family via the guest book at www.doanmillsfuneralhome.com.

The family of Jack M. Hatcher created this Life Tributes page to make it easy to share your memories.