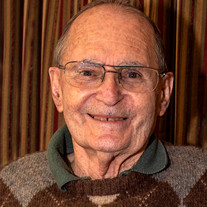 RICHMOND, Ind. - Henry Meredith Tilmans, age 89, of Richmond, Indiana, died Friday, February 26, 2021, at his home surrounded by his family. Henry was born June 12, 1931, in New Kensington, Pennsylvania, to Henry Ernest and Nancy Ellen Humes Tilmans. He was a 1949 graduate of Richmond High School and attended Purdue University. Henry received his bachelor's degree from Ohio Wesleyan University and earned his master's degree from the Air Force Institute of Technology. He served in the U.S. Air Force as an aerospace engineer for 28 years, retiring as a lieutenant colonel. During his Air Force career, Henry also served as a typhoon chaser in Guam and Okinawa. He worked with the Atlas, Minuteman, and Titan missile programs. After retiring from the Air Force, Henry worked for Martin Marietta with the space shuttle and Titan programs for 11 years. He enjoyed photography, sports, reading non-fiction, and traveling. Survivors include his wife of 66 years, Audrey Marie Jelly Tilmans; daughters, Jeanne Marie (Stephen) Weddle of Richmond, Susanne Elizabeth (Michael) Yankovich of Brunswick, Ohio, and Catherine Ellen (Robert) Harmon of San Pedro, California; son, Henry Andrew (Cynthia) Tilmans of Mobile, Alabama; 10 grandchildren; one great-grandson; niece; nephews; cousins; and many friends. He was preceded in death by his parents and sisters, Nancy Lee Tilmans and Henrietta Hankosky. The family would like to thank Reid Hospice for their loving care of Henry. Visitation for Henry Meredith Tilmans will be from 10:00 a.m. to 12:00 p.m. Wednesday, March 3, 2021, at Doan and Mills Funeral Home, 790 National Road West, Richmond. Funeral service will follow at 12:00 p.m. Wednesday, March 3, 2021, at Doan and Mills Funeral Home with Chaplain Rick Alvey officiating. Please plan to wear your own mask in the funeral home. Burial will be in Earlham Cemetery with military honors provided by the Wright-Patterson Air Force Base and Wayne County Honor Guard. Memorial contributions may be made to: Friends of Morrisson-Reeves Library, c/o Jenie Lahmann, 80 North 6th Street, Richmond, IN 47374. Condolences may be sent to the family via the guest book at www.doanmillsfuneralhome.com.

The family of Henry Meredith Tilmans created this Life Tributes page to make it easy to share your memories.