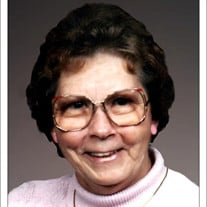 CENTERVILLE, Ind. – Alta Grace Phillips, age 95, of Centerville, Indiana, died Monday, November 30, 2020, at Heritage House of Richmond. Born March 11, 1925, in Germantown, Indiana, to Redford and Kathryn Boyer Lockwood, Alta was a life-long resident of Wayne County, Indiana. She attended Lincoln High School in Cambridge City, Indiana. Alta worked hard her entire life. Beginning as a teenager, she cleaned houses. Alta then worked at the creamery in Cambridge City. Next, she became an LPN and ran a nursing home in Cambridge City and Echo Trail Nursing Home in Centerville. Alta was the owner/operator of Grace’s Elite restaurant at the Leland Legacy. She also worked at Marvel Industries in Richmond. Finally, Alta worked in elder care at the Richmond Senior Community Center and cared for many people as a traveling personal home health aide. She was a member of Bethesda Worship Center and the American Legion Harry Ray Post #65 Auxiliary. In her younger years, Alta was a fastpitch softball pitcher, one of the best in the state at the time. She was also a powder puff race car driver and enjoyed bowling, watching NASCAR, crocheting, and participating in any sport. Alta was adventurous, as was seen when she traveled to visit her husband while he was in the service during WWII, finding work wherever she went. You could also dare her to do anything and she would do it, including taking part in the Polar Bear Plunge, most recently in 2000. Alta will be dearly missed. Survivors include her daughter, Julia Ann (David) Holloway of Louisville, Kentucky; sons, Dennis Edward Hunt of Centerville, Indiana, and Victor James (Patricia) Hunt Jr. of Milton, Indiana; stepson, Mark (Trish) Phillips of Centerville; 13 grandchildren; 45 great-grandchildren; 49 great-great-grandchildren; nieces; nephews; cousins; and many friends. She was preceded in death by her first husband, Victor James Hunt Sr.; second husband, Oliver Milton Phillips; son, Joe Alan Hunt; and siblings, Martin Lockwood, Mary De’Anne, and Vivian Joann Fellman. Due to the current COVID-19 situation, we regret to inform you that services for Alta Grace Phillips will be private with Chaplain Rick Alvey officiating. The service will be recorded and available on the Doan & Mills Funeral Home website. Burial will be in Crown Hill Cemetery. Arrangements are being handled by Mills Funeral Home, 405 East Main Street, Centerville. Memorial contributions may be made to: Alzheimer's Association, 50 East 91st Street, Suite 100, Indianapolis, IN 46240. Condolences may be sent to the family via the guest book at www.doanmillsfuneralhome.com.

The family of Grace Phillips created this Life Tributes page to make it easy to share your memories.