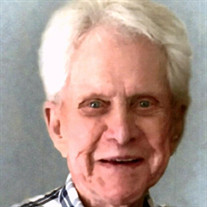 RICHMOND, Ind. – Gerald “Jerry” Stevens, age 87, of Richmond, Indiana, passed away Saturday, January 23, 2021, at his home. Born June 19, 1933, in Richmond, Indiana, Jerry was the seventh child of William and Hattie Stevens. He was a 1951 graduate of Richmond High School. Jerry served in the U.S. Army and was honorably discharged in 1954 with the rank of SP5. He relocated to Chicago, Illinois, in 1956, where he successfully pursued simultaneous careers in the medical field and interior design. Jerry was a partner in a Phoenix, Arizona, design studio for three years. Upon retirement in 1995, he returned to Richmond. Survivors include his beloved sister, Lorraine Stamper; sister-in-law, Lois Stevens; nieces, Linda Giannini, Marty Taylor, Melissa Burk, Susan Langenkamp, and Lori Holmes; nephew, Dan Stevens; multitude of great-nieces and great-nephews; and many friends, including special friends, Jane and John Andrich, Nancy Cuppage, and Saran Khachadourian, all of Chicago, Sue Cunningham, and Marteen Dawes of Richmond. He was preceded in death by his parents; sisters, Edna Edwards, Ethel Terry, and Alma Stevens; brothers, Lawrence “Larry” and Sherman “Bud” Stevens; niece, Cynthia Martin; nephews, Jay Edwards and Bill, Mack, and Douglas Stevens; and Sharon Sabla, the best friend anyone could hope to have. Per Jerry and in lieu of any traditional funeral services, “just think of me once in awhile and smile.” Arrangements are being handled by Doan & Mills Funeral Home, 790 National Road West, Richmond. Condolences may be sent to the family via the guest book at www.doanmillsfuneralhome.com.

The family of Gerald "Jerry" Stevens created this Life Tributes page to make it easy to share your memories.