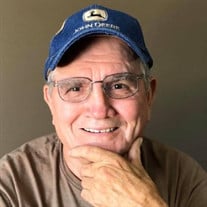 RICHMOND, Ind. – Gerald Wayne “Jerry” Claypoole, age 76, of Richmond, Indiana, died Thursday, August 20, 2020, at his home. Gerald was born on June 2, 1944, in Mays Lick, Kentucky, to Stanley Glen and Elma Yancy Robb Claypoole. He was one of 10 children and worked on the family farm. Gerald joined the U.S. Army in 1965 and later worked at Magee Bakery in Maysville, Kentucky. With every paycheck, he bought a gift for his mother, with whom he was very close. Gerald married Vicky Wallace in 1972, and they had their only son, Jerry William, in 1973. Following this, they moved to Richmond, and Gerald began working as a welder, alongside his brother, Everett, at Western-Cullen-Hayes, Inc. for 37 years. He joined Hiram Lodge #417 in Centerville, Indiana, on July 19, 1984. Gerald was a “pool shark” from an early age and loved to play with his friends at the Richmond Senior Community Center. He also loved hunting for bargains at yard sales. Gerald’s best times were spent hunting and fishing with Jerry and later with his granddaughters. He adored his granddaughters, and they adored him. Gerald never missed a game or event where they were concerned. He never knew a stranger and touched so many lives. Gerald was a family man and brought joy to all who knew him with his infectious smile. Survivors include his beloved son, Jerry Claypoole and his wife, Jennifer, of Centerville; granddaughters, Olivia and Ella Claypoole of Centerville; brother, Everett Claypoole; sisters, Velma Bellamy, Mary Davis, and Carol Galbraith; nieces; nephews; cousins; former wife, Vicky Turner, who he had reconnected with recently; stepchildren and step-grandchildren from a previous marriage; and many friends. He was preceded in death by his parents; brothers, Glen and Raymond Claypoole; and sisters, Carolyn Eitel, Betty Donatelli, and Donna “Sue” Manning. Visitation for Gerald Wayne “Jerry” Claypoole will be from 5:00 to 7:00 p.m. Tuesday, August 25, 2020, at Doan & Mills Funeral Home, 790 National Road West, Richmond, with a Masonic Service at 6:45 p.m. Military honors will be provided by the Wayne County Honor Guard. Graveside service will be held at 1:00 p.m. Wednesday, August 26, 2020, at Mays Lick Cemetery, Old U.S. Highway 68, in Kentucky. Please plan to wear your own mask when entering the funeral home. In lieu of flowers, memorial contributions may be made to: St. Jude Children's Research Hospital, c/o Memorial Giving, 501 St. Jude Place, Memphis, TN 38105 or Centerville Youth League, 100 Temple Drive, Centerville, IN 47330. Condolences may be sent to the family via the guest book at www.doanmillsfuneralhome.com.

The family of Gerald Wayne "Jerry" Claypoole created this Life Tributes page to make it easy to share your memories.