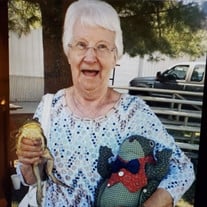 CENTERVILLE, Ind. – Frances Estes, affectionately known as “Tom”, the nick name given to her by her parents for being such a tomboy when growing up, passed away at the sweet age of 86 on February 5, 2022. Tom was born on September 17, 1935, in Willow, Kentucky, to Hubert and Susie McKinney, one of 10 siblings who loved each other dearly, but would scrap it out and still love each other always. Because she came from such a large family, Tom loved to tell all who would listen about her two boys, grandkids, and great-grandkids. Her greatest pride came in knowing that she had raised her two sons, Randy and Joe, to be the men they are today. After taking the bus from Kentucky to Indiana at the age of 17, Tom took up the trade of being a seamstress and enjoyed doing this for more than 45 years until her passing. She was a devoted Christian, who valued family. Tom was married in 1954 to the love of her life, Herman, and they enjoyed 59 years together until his death in 2013. Tom is reunited with Herman now and will be able to continue loving him and annoying him with the phrase, “Herman, you don’t need that cookie.” Tom was so full of happiness and love and had an ‘I can do anything’ attitude, always proving that she could. Being around Tom was a place you wanted to be, as she valued her friends and always put forth the effort to be the best and most loyal friend anyone could have. After retiring, Tom lived life to the fullest. Some of her most memorable accomplishments in life were traveling and checking things off her bucket list, including riding a camel and winning first place in a bullfrog racing competition at the county fair. One of her favorite things to do was create beautiful handmade quilts, grand champion and blue-ribbon award winners, which she proudly gave as gifts to her family and friends. Tom was also an accomplished cook with a down home country style. She was known for her world-famous chicken and dumplings, along with her glazed sweet potatoes and apple dumplings, which people begged for at any gathering and would come from miles around to get a chance to eat them. Tom was a very strong-willed woman, who had very strong opinions on any given subject and would bluntly share her point of view whether you liked it or not. Her words of advice to the younger generation of today, as she poked them on top of their head, were, “Use that head of yours for more than a hat rack!!!” Survivors include her sons, Randy Gene Estes of Greenwood, Indiana, and Ricky Joe (Lynn) Estes of Hagerstown, Indiana; five grandchildren; nine great-grandchildren; nieces; nephews; and many friends. She was preceded in death by her husband of 59 years, Herman Estes, who died April 4, 2013, and parents. Visitation for Frances Estes will be from 4:00 to 7:00 p.m. Wednesday, February 9, 2022, at Doan & Mills Funeral Home, 790 National Road West, Richmond. Funeral service will be held at 11:00 a.m. Thursday, February 10, 2022, at Doan & Mills Funeral Home with Rev. Paul R. Register officiating. Burial will be in Crown Hill Cemetery. Memorial contributions may be made to: Tunnel to Towers Foundation, 2361 Hylan Boulevard, Staten Island, NY 10306. Condolences may be sent to the family via the guest book at www.doanmillsfuneralhome.com.

CENTERVILLE, Ind. &#8211; Frances Estes, affectionately known as &#8220;Tom&#8221;, the nick name given to her by her parents for being such a tomboy when growing up, passed away at the sweet age of 86 on February 5, 2022. Tom was born on September... View Obituary & Service Information

The family of Frances "Tom" Estes created this Life Tributes page to make it easy to share your memories.