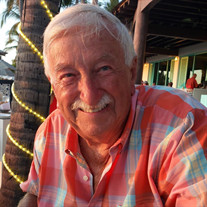 RICHMOND, Ind. - Ernest W. Hendricks, DDS, age 79, of Richmond, Indiana, easily transitioned Friday, January 29, 2021, at the family farm. Born October 26, 1941, in Hamilton, Ohio, to Roy and Amy Hensley Hendricks, Ernie graduated from Talawanda High School in Oxford, Ohio. He earned his license in Medical Technology from Carnegie College in Cleveland, Ohio. Ernie worked at Reid Hospital as a Med Tech while he continued his education, graduating from Earlham College in 1967 and the IU School of Dentistry in 1971. Following graduation, he opened his dental practice on Chester Boulevard in Richmond in 1971. Ernie was a lifetime member of the Piedmont Dental Study Club; member and past president of the Eastern Indiana Dental Society, where he was affectionately referred to as "The Godfather" by his colleagues; and member and trustee of the Indiana Dental Association. Ernie also served as president of the Spring Grove Town Board for many years. He enjoyed playing golf and tennis, listening to music, watching sports, and traveling, including taking trips during February for more than 30 years with his wife, Pat. Those trips usually included an exotic beach where Ernie hunted for shark teeth and beautiful shells. He always returned home with a fabulous tan. Ernie loved to hunt mushrooms in the spring and enjoyed spending time with his grandchildren. He always took great pride in his landscaping and flower gardens at his office. His patients often remarked how they enjoyed the beautiful setting, the interesting items he liked to display in the office, and his personal selection of music playing when they visited. Survivors include his wife of 56 years, Patricia Ann Vorous Hendricks; grandchildren, Nathan Hendricks of Richmond, Oliver Hendricks of New Palestine, Indiana, and Stephanie Sandlin of Indianapolis, Indiana; great-grandson, Zayden Bryant; cousins; long standing work family, Jenny Warfield and Kathy Ketron; and many patients that he considered his extended family and friends. He was preceded in death by his son, Roy Douglas Hendricks and parents. The family would like to thank Ernie's brothers-in-law and sister-in-law, who lovingly cared for him over the last few months. Due to the current COVID-19 situation, we regret to inform you that services for Ernest W. Hendricks, DDS will be private. The service will be recorded and available on the Doan and Mills Funeral Home website. A celebration of Ernie's life will be held in the future when the COVID-19 restrictions are lifted. Arrangements are being handled by Doan and Mills Funeral Home, 790 National Road West, Richmond. Memorial contributions may be made to: an account for Ernie's grandchildren with checks payable to Patricia Hendricks and mailed to 3Rivers Federal Credit Union, 34 South 7th Street, Richmond, IN 47374 (Memo field: Ernie Hendricks) or Cope Environmental Center, 1730 Airport Road, Centerville, IN 47330. Condolences may be sent to the family via the guest book at www.doanmillsfuneralhome.com.

The family of Ernest W. Hendricks, DDS created this Life Tributes page to make it easy to share your memories.