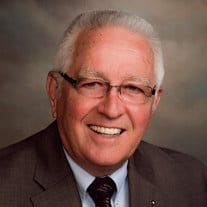 FOUNTAIN CITY, Ind. - Ernest R. "Ernie" Heighway, age 84, of Fountain City, Indiana, died Saturday, August 22, 2020, at Reid Health. Born November 25, 1935, in Akron, Indiana, to Robert O. and Ruth Eleanor Hamilton Heighway, Ernie was a 1953 graduate of Beaver Dam High School in Akron. He was a farmer early in his life. Ernie moved to this area in 1969, where he was a realtor from 1973 to 1982. Ernie then retired in 2001 from Old National Bank and had also worked at U.S. Bank. He was the New Creations Music Director in the early 1970s. Ernie was a member of LifeSpring Church and The Gideons International, serving as the State President for three years. Ernie and Sally took the grandchildren to the Gideons International Convention every year. He enjoyed farming, being outdoors, and volunteering at Reid Health. His grandchildren were very special to him, and he loved attending their school events. Survivors include his wife, Sally E. Shively Heighway, to whom he was married on April 22, 1956; daughter, Debra Heighway of Fountain City, Indiana; sons, Douglas (Kimberly) Heighway of White House, Tennessee, David (Hila) Heighway of Buckeye, Arizona, and Daniel (Karen) Heighway of Mt. Juliet, Tennessee; grandchildren, Ben (Jess) Heighway, Mike (Meg) Heighway, Katelyn (Daniel) Elliott, Kristin (Michael) Parkin, Andrew (Kailey) Heighway, Ally (Troy) Meyers, Jacob Collins, Joshua Collins, and Emily Heighway; seven great-grandchildren with two on the way; sisters, Karen (Larry) Wilson of Montgomery, Indiana, and Sharon (Con) Shewman of Akron, Indiana; brother, Ned (Linda) Heighway of Akron; nieces; nephews; and many friends. He was preceded in death by his parents. Visitation for Ernest R. Heighway will be from 4:00 to 8:00 p.m. Tuesday, August 25, 2020, at LifeSpring Church North, 5600 North U.S. 27, Richmond. Funeral service will be held at 10:00 a.m. Wednesday, August 26, 2020, at LifeSpring Church North with Pastor David Anderson and Pastor Steve Bray officiating. Please plan to wear your own mask when entering the church. Burial will be in Goshen Cemetery. Arrangements are being handled by Doan and Mills Funeral Home, 790 National Road West, Richmond. Memorial contributions may be made to: The Gideons International for the Memorial Bible Fund, P.O. Box 1092, Richmond, IN 47375; LifeSpring Church, 5600 North U.S. 27, Richmond, IN 47374; or Reid Foundation, 1100 Reid Parkway, Richmond, IN 47374. Condolences may be sent to the family via the guest book at www.doanmillsfuneralhome.com.

The family of Ernest R. "Ernie" Heighway created this Life Tributes page to make it easy to share your memories.