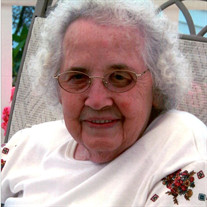 RICHMOND, Ind. – Erlabell Petry, age 104, of Richmond, Indiana, died Sunday, November 15, 2020, at The Springs of Richmond. Born March 31, 1916, in Richmond, Indiana, to Marion E. and Jennie E. Heller Murphy, Erlabell lived in this community most of her life. She retired from Reid Hospital, where she served as a surgical technician. Erlabell was a member of the Seventh Day Adventist Church since 1945 and was formerly active with Girl Scouts of Central Indiana, where she was honored as the oldest, living Girl Scout. Erlabell was a gifted writer of poetry, artist, organist, pianist, and photographer. She enjoyed flower gardening and astrology. Survivors include her daughters, Barbara Lee Mullin of Richmond, JoAnne Lawson of Farmersville, Ohio, and La Verne Smith of Richmond; sons, Ronald E. (Connie) Wicks and David A. Wicks, both of Richmond; stepdaughter, Madonna of Florida; 24 grandchildren; 44 great-grandchildren; many great-great-grandchildren; nieces; nephews; and many friends. She was preceded in death by her husbands, Merrill M. Petry, who died in 1985 and Fred Rusterholz, who died in 1966; daughters, Blossom Wicks, who died in 1945, Christine Matheny, who died in 2005, and Shirley J. Osborne and Jennie L. Baker, both who died in 2016; stepchildren, Jacqueline Aernie, Bernona Waugh, and John Petry; father; mother, Jennie E. Hough; sister, Elizabeth Cann, who died in 2006; and brothers, Bob Murphy, who died in 1994, Norval Murphy, who died in 1967, and William Murphy, who died in 2002. Due to the current COVID-19 situation, a private service for Erlabell Petry will be held at the Seventh Day Adventist Church with Pastor Blaine Fults officiating. The service will be recorded and available to view on YouTube. Burial will be in Earlham Cemetery. Arrangements are being handled by Doan & Mills Funeral Home, 790 National Road West, Richmond. Memorial contributions may be made to: Seventh Day Adventist Church, 4356 U.S. Highway 35 North, Richmond, IN 47374. Condolences may be sent to the family via the guest book at www.doanmillsfuneralhome.com.

The family of Erlabell Petry created this Life Tributes page to make it easy to share your memories.