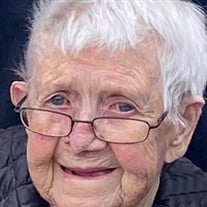 TULARE, Calif. – Elizabeth Ann “Libby” Dunbar, age 89, formerly of Richmond, Indiana, passed away Thursday, June 3, 2021, at Twin Oaks Assisted Living in Tulare, where she lived for the past five years. Libby was born on March 27, 1932, in Richmond, Virginia, to Howard and Zella Henderson Watkins. While living in Virginia, she met the man of her life. Libby married Marvin “Shorty” Dunbar in 1950. They moved to Richmond, Indiana, in 1952 and started a new life together. In October 1953, Libby gave birth to the first of two sons, Benny Dunbar, followed by Randy Dunbar, who was born in 1963. After Shorty passed away in 1988, she remained in Richmond until August 1999, when she moved to Tulare to be with her son, Randy, and grandchildren, Alyssa and Nathan. Libby will be missed by all, but she is a woman who won’t be forgotten by anyone. Recently, many people called her feisty, and that she was! Libby enjoyed fishing, bingo, gambling, crocheting, and watching WWF. She also used to enjoy playing cards with her friends, always accusing Shorty of cheating. Libby loved to cook, but secretly feared her food was going to be a “flop” or a “mess”. Of course, her food was always delicious! Libby enjoyed baking, as well, and was known for trying new recipes for a cake, candy, or other dessert, especially at Christmas time. Above all, she loved spending time with her grandkids and great-grandkids, who always wanted to play Patty Cake. Survivors include her son, Randy (Cindy) Dunbar of Tulare; grandchildren, Alyssa (Jordan) Dunbar Mendes of Tulare and Nathan (Sydney) Dunbar of Spirit Lake, Idaho; five great-grandchildren, Jameson and Georgia Mendes of Tulare and Tyce, Charlotte, and Beau Dunbar of Spirit Lake and one on the way; sister, Peggy Lawson of Barboursville, Virginia; and brothers, Pete Watkins of Salem, Virginia, Tony Lawson of Richmond, Indiana, David (Margaret) Lawson of Canadian, Oklahoma, Bobby “Dallas” Lawson of Marion, Virginia, and Sam Lawson of Zionville, North Carolina. Libby was also blessed with nieces, nephews, cousins, and many, many close friends. She was preceded in death by her husband of 38 years, Marvin “Shorty” Dunbar, who passed away in 1988; son, Benny Dunbar; father; mother, Zella Lawson; sister, Betty “Fritzie” Lundy; and brothers, Lester “Durg” Lawson, Roger “Bookie” Lawson, and Larry Lawson. Visitation for Elizabeth Ann “Libby” Dunbar will be from 10:00 a.m. to 12:00 p.m. Monday, June 14, 2021, at Doan & Mills Funeral Home, 790 National Road West, Richmond. Funeral service will follow at 12:00 p.m. Monday, June 14, 2021, at Doan & Mills Funeral Home with Pastor Rick Alvey officiating. Burial will be in Elkhorn Cemetery. There will be a gathering at Glen Miller Park for family and friends following the burial. Memorial contributions may be made to: The National Organization for Rare Disorders, Attn: Department 5930, P.O. Box 4110, Woburn, MA 01888 or online at [email protected] for Libby’s granddaughter, Alyssa Mendes, and great-grandson, Jameson Mendes. Condolences may be sent to the family via the guest book at www.doanmillsfuneralhome.com.

The family of Elizabeth Ann "Libby" Dunbar created this Life Tributes page to make it easy to share your memories.