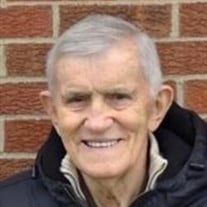 RICHMOND, Ind. – Edward B. Scalzo, age 91, of Richmond, Indiana, died Friday, July 10, 2020, at his home surrounded by his family. Edward was born on November 8, 1928, in Kenosha, Wisconsin, to Peter and Florance Benidict Scalzo. He graduated from Bradford High School and earned a bachelor’s and master’s degree in mechanical engineering from California Western. Edward proudly served in the U.S. Air Force. He began working for American Motors in Kenosha as summer help at the age of 17. Edward started as a parts washer, but through hard work, determination, and a great knowledge of how things work, he eventually made his way to plant manager. Edward managed factories around the world, including Europe, Asia, South Africa, and Egypt. He continued to succeed in the business and became project manager for many American Motors/Chrysler/Fiat motors, which are still on the road today. Edward’s last position was serving as a process engineer, before retiring in 1983. He relocated to Wayne County, Indiana, from Florida in 2012. Edward was a member of Shriners International. Some of his most memorable experiences included: walking the Great Wall of China, climbing the pyramids in Mexico, and visiting the Vatican and Colosseum. He enjoyed hunting, fishing, boating, watching the Green Bay Packers, and remodeling and rebuilding anything. There was nothing Edward could not fix, and he was fondly known as the ‘MacGyver’ of the family. Survivors include his children, Edward Lewis (Denise) Scalzo of Richmond and Cheryl (Virginia Drennen) Scalzo of Stockbridge, Michigan; grandchildren, Bridget Smith-Robbins of Kenosha and Mindy (Mark) Toschlog and Chris (Tami) Scalzo, both of Richmond; eight great-grandchildren; great-great-grandson; sister, Audrey Winn of San Francisco, California; nieces; nephews; cousins; and many friends. He was preceded in death by his wife of 54 years, Janice M. Cain Scalzo, who died June 24, 2005; sons, Gene R. and Jeff Scalzo; sisters, Annamary Hamsing, Ada McLain, and Alice Scalzo; and brothers, Roy, James, and Phillip Scalzo. The family would like to thank the staff of AseraCare Hospice, especially Elizabeth Hogg, for the loving care they gave to Edward. There will be no public services for Edward B. Scalzo. Private graveside service will be held at the convenience of the family. Burial will be in Crown Hill Cemetery with military honors provided by the Wayne County Honor Guard. Arrangements are being handled by Mills Funeral Home, 405 East Main Street, Centerville. Memorial contributions may be made to: Shriners Hospitals for Children - Office of Development, 3229 Burnet Avenue, Cincinnati, OH 45229-3095. Condolences may be sent to the family via the guest book at www.doanmillsfuneralhome.com.

The family of Edward B. Scalzo created this Life Tributes page to make it easy to share your memories.