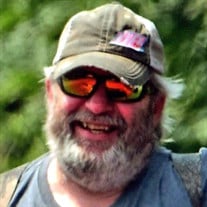 RICHMOND, Ind. – David Alan Winters, age 62, life-long Richmond resident, passed away Monday, September 27, 2021, at Reid Health. His death was attributed to heart disease. Born August 3, 1959, David was the son of Dale and Anita Taylor Winters. He was a 1978 graduate of Richmond High School. During his early years, David attended Abington Christian Church. He enjoyed being a member of youth softball leagues. David participated in 4-H for several years and continued an interest in 4-H with his son. Following graduation, David began employment with Dunham Lehr/Farmhand and later worked at NATCO and Wayne Works. His abilities as a skilled welder led him to a job at Elevator Equipment Corporation, where he worked for over 35 years. David served as supervisor of the Power Unit/Platform and Sling Department. David participated in a weekly bowling league for over 20 years, scoring several 300 games in his career. An avid hunter, David made trips out west, as well as annual deer hunting adventures on his family’s property. For the past seven years, David was actively involved in modified dirt track racing, having organized his own racing team, DWR Racing. Along with his son, David Jr., and friends, Bill Lewis and Jimmie Haager, they built several cars. The team was known at racetracks in Liberty, Montpelier, Gas City, Eldora, and Brownstown. In 2018, the team won the American Ethanol Modified Tour. Left to carry on his memory are his son and daughter-in-law, David Winters Jr. and Alicia Smith Winters; mother Anita Winters; the mother of his son, Sherri Benge; special friends, Bill and Teresa Lewis; aunt and uncle, Ann and Jerry Krider; and Jimmie Haager, driver for DWR. He was preceded in death by his father, Dale Winters. Visitation for David Alan Winters will be from 2:00 p.m. to 5:00 p.m. Sunday, October 3, 2021, at Doan & Mills Funeral Home, 790 National Road West, Richmond. Funeral service will be held at 10:00 a.m., Monday, October 4, 2021, at Doan & Mills Funeral Home with Pastor Nate Lafuze officiating. Burial will be in Goshen Cemetery. In lieu of flowers, memorial contributions may be made to: DWR Racing. Condolences may be sent to the family via the guest book at www.doanmillsfuneralhome.com.

The family of David Alan Winters created this Life Tributes page to make it easy to share your memories.