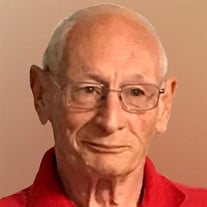 CENTERVILLE, Ind. – David Lee Hall, age 76, of Centerville, Indiana, went home to be with his Lord and Savior on Saturday, October 31, 2020. David was born on April 19, 1944, in Richmond, Indiana, to Maynard and Kathleen Peters Hall. Living in Wayne County, Indiana, most of his life, he graduated from Seymour High School and earned an associate degree from Ivy Tech Community College. David proudly served multiple tours of duty with the 481st Tactical Fighter Squadron of the U.S. Air Force during the Vietnam War. He retired from Visteon/Ford in 2007, where he worked as a journeyman plumber and pipefitter for 34 years. David was a hard-working and devoted family man and husband, a loving father, a proud grandpa, and a good friend. He was an active member of Christ Presbyterian Church and a dedicated volunteer at community schools. David also frequently volunteered to drive meals to those in need for Meals on Wheels. He was a masterful handyman and frugal do-it-yourselfer, who enjoyed teaching those skills and abilities to his family members and friends. David was always quick to make a joke and loved nothing more than walking in the woods and spending time with his family, children, and grandkids. Survivors include his dear wife of 55 years, Judith Ann Bell Hall; children, Stephen (Jerica) Hall of Paris, Ohio, Stephanie (Derek) Sheridan of Toledo, Ohio, and Amy (Tony) Farley of Centerville, Indiana; grandchildren, Austin, Katie, Logan, Sam, Karlee, and Savannah; sisters, Pat (Jerry) Everhart and Kathy Donithier, both of Gratis, Ohio, and Mary Ramsey of Richmond; brother, Richard Hall of Indianapolis, Indiana; special friends, Jerry and Shelia Bell; and many nieces, nephews, cousins, and friends. He was preceded in death by his parents and infant brother. There will be a private, graveside service and burial for David at Abington Cemetery, including military honors provided by the Wayne County Honor Guard. Arrangements are being handled by Mills Funeral Home, 405 East Main Street, Centerville. In lieu of flowers, memorial contributions may be made to: Birthright, 303 South 6th Street, Richmond, IN 47374. Condolences may be sent to the family via the guest book at www.doanmillsfuneralhome.com.

The family of David Lee Hall created this Life Tributes page to make it easy to share your memories.