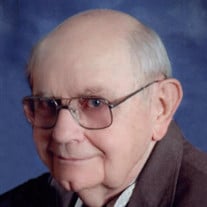 RICHMOND, Ind. – On December 23, 2020, our father, Clement Charles Lahrman, at the ripe old age of 96, left this life to be rejoined with our beloved mother, Susanne. Sadly, he was another victim of the coronavirus. Born August 24, 1924, in Wayne Township, Indiana, to Clem Joseph and Bertha L. Miles Lahrman, Clem was a life-long resident of this community. He graduated from Richmond High School in 1943 and attended DePauw University in Greencastle, Indiana. Clem served in the U.S. Navy during WWII. He retired as an industrial electrician from Perfect Circle in Hagerstown, Indiana, in 1986 and previously worked at Avco for 27 years. Clem treasured living in the middle of 18 acres of trees, fondly known as “the woods”, where he and Susanne made their home for over 40 years. He was a good father and an honest and hardworking man. Clem was loved by all and will be sorely missed. Survivors include his daughters, Marianne (Steven) Foster of Richmond and Joanne (Mike) Jones of Abington, Indiana; sons, John (Rebecca) Lahrman of Richmond and Daniel Lahrman of Kentucky; daughter-in-law, Susan Lahrman of Richmond; grandchildren, Brandy, Amy, Scott, and Jennifer; eight great-grandchildren; brother, Richard (Beverly) Lahrman of Richmond; nieces; nephews; and many friends. He was preceded in death by his wife of almost 70 years, Susanne I. “Sue” Rohe Lahrman, who died October 6, 2019; son, James Lahrman; parents; and brother, Donald Lahrman. Due to the current COVID-19 situation, we regret to inform you that services for Clement Charles Lahrman will be private with Chaplain Rick Alvey officiating. The service will be recorded and available on the Doan & Mills Funeral Home website. Burial will be in St. Andrew Catholic Cemetery. Arrangements are being handled by Doan & Mills Funeral Home, 790 National Road West, Richmond. Memorial contributions may be made to: Reid Foundation, 1100 Reid Parkway, Richmond, IN 47374. Condolences may be sent to the family via the guest book at www.doanmillsfuneralhome.com.

RICHMOND, Ind. &#8211; On December 23, 2020, our father, Clement Charles Lahrman, at the ripe old age of 96, left this life to be rejoined with our beloved mother, Susanne. Sadly, he was another victim of the coronavirus. Born August 24, 1924,... View Obituary & Service Information

The family of Clement Charles Lahrman created this Life Tributes page to make it easy to share your memories.