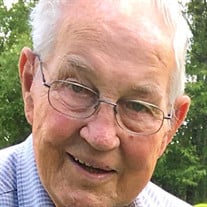 RICHMOND, Ind. – Charlie William Bailey, age 89, of Richmond, Indiana, died peacefully Saturday, January 15, 2022, in Panama City, Florida, with his family by his side. Charlie was born on September 27, 1932, in Talcott, West Virginia, to Edgar J. and Rena Maddy Bailey. He came to Indiana while working on the C&O Railroad, where he met his wife, Mable, in Cottage Grove, Indiana. After serving in the U.S. Army during the Korean War, Charlie went to work for GTE, retiring as a supervisor. Following his retirement, Charlie opened Bailey’s Phone Service, which he operated for 22 years. Charlie was a member of Ravinia Park Baptist Church. Survivors include his daughter, Darla A. (Liz) Bailey; brother, James E. (Lorene) Bailey; nephews, Tim (Kris) Bailey and Ken Bailey; great-niece, Dr. Nicole Bailey; great-nephew, Sean Bailey; and special friends, Barbara and John Swart. He was preceded in death by his wife of 68 years, Mable Gross Bailey, who died December 28, 2020, and parents. The family wishes to express their gratitude to Charlie’s caregivers, Vicki, Erica, and Morgan. Visitation for Charlie William Bailey will be from 10:00 to 11:00 a.m. Tuesday, January 25, 2022, at Doan & Mills Funeral Home, 790 National Road West, Richmond. Funeral service will follow at 11:00 a.m. Tuesday, January 25, 2022, at Doan & Mills Funeral Home with Pastor James E. Slaven officiating. Private burial will be in Glen Haven Memorial Gardens. Memorial contributions may be made to: Ravinia Park Baptist Church, 3015 South B Street, Richmond, IN 47374. The family also requests that you plant a perennial this spring in honor of Charlie and Mable Bailey. Condolences may be sent to the family via the guest book at www.doanmillsfuneralhome.com.

The family of Charlie William Bailey created this Life Tributes page to make it easy to share your memories.