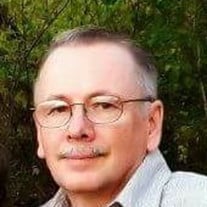 MEEKER, Okla. - Charles Roger Smith, age 62, formerly of Wayne County, Indiana, died unexpectedly Wednesday, December 2, 2020, at his home in Meeker, Oklahoma. Born May 21, 1958, in Richmond, Indiana, to Charles H. Smith and Barbara A. Wilmoth Smith, Roger lived most of his life in Wayne County. He was a 1979 graduate of Centerville High School. Roger also took Vo-Tech automotive classes. He attended Bethel Chapel in Richmond and was a current member of Calvary Pentecostal Church in Shawnee, Oklahoma. Roger was a member of the NRA and the former CIOSA. He enjoyed hunting, fishing, and working on cars. Roger most enjoyed spending time with his family and attending church. Survivors include his wife of 22 years, Lorretta Crutcher Smith, of Meeker, Oklahoma; sons, Tanner (Amber) Smith of Eubank, Kentucky, and Caleb Smith of Meeker, Oklahoma; grandson, Austin Smith of Eubank, Kentucky; mother, Barbara "Bobbie" A. Smith (Bill Minck) of Centerville, Indiana; father, Charles H. Smith of Greenfield, Indiana; brothers, Ronnie Smith of Centerville, Indiana, and Brian (LaDonna) Smith of Greens Fork, Indiana; maternal grandmother, Margaret Wilmoth Allen of Richmond; nieces; nephews, including Timothy Oliver; aunts; uncles; cousins; and many friends. Roger was preceded in death by his brother, Timothy Smith; sister, Melissa Smith; maternal grandfather, Clyde Wilmoth; maternal grandmother, Laura Marsee; and paternal grandparents, Neil and Carrie Smith. Due to the current COVID-19 situation, we regret to inform you that services for Charles Roger Smith will be private with Rev. Brent McCutcheon and Steve Smith officiating. The service will be recorded and available at www.doanmillsfuneralhome.com. Burial will be in Crown Hill Cemetery. Arrangements are being handled by Mills Funeral Home, 405 East Main Street, Centerville. Over the years, Roger has been a frequent donor of blood and plasma in honor of his brother, Timothy, who lost his battle to leukemia. So, in lieu of flowers, memorial contributions may be made to the Leukemia and Lymphoma Society, Indiana Chapter, 9075 N. Meridian Street, Suite 150, Indianapolis, IN 46260. Condolences may be sent to the family via the guest book at www.doanmillsfuneralhome.com.

The family of Charles "Roger" Smith created this Life Tributes page to make it easy to share your memories.