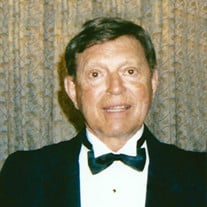 RICHMOND, Ind. - Charles E. "Chuck" Pence, age 91, of Richmond, Indiana, passed away Friday, December 11, 2020, at Golden Living Center - Richmond. Chuck was born on July 3, 1929, in Richmond, Indiana, to George Cooper and Alice S. Settles Pence. He served in the U.S. Army, 47th Infantry Division, and was assigned to a National Guard unit from North/South Dakota and Minnesota. Chuck was stationed at Fort Rucker, Alabama, from March 1953 to February 1955. After his discharge from the military, he relocated to Minneapolis, Minnesota, to attend the University of Minnesota. While attending the university, Chuck was employed as Assistant to the President of the Minneapolis School Board. During this time, he was also a member of Alpha Delta Sigma fraternity and enjoyed volunteering as a tour guide at the Guthrie Theatre and supporting the Theatre in the Round Minneapolis Symphony Orchestra and Twin Cities Gay Men's Chorus. Upon receiving his Bachelor of Arts degree, Chuck joined a major real estate company as Vice President of Sales and Marketing. From there, he formed his own real estate brokerage, Chuck Pence and Associates. After retiring from his business, the last nine years of Chuck's working career was spent as a Recreational Specialist for the City of Minneapolis Park and Recreation Department. He retired in May 2005 and moved back to Richmond to be near his family. Chuck also joined the Earlham College Wellness Center and Lifetime Fitness upon his return. During his lifetime, Chuck enjoyed international travel, music, theatre, and the arts. He also enjoyed gourmet cooking and entertaining. Chuck's favorite activities were skiing and fishing. His sister, Martha Ball, was his favorite poet. Survivors include his nieces and nephews. He was preceded in death by his parents; sisters, Helen (Wilbert) Lawrence, Alice Mae (Leslie) Wood, Marian "Peg" (Charles) Lacey, Gladys "Irene" (Ira) Creech, Frances (Robert) Jones and her first husband, Leslie Ponder, and Martha (Robert) Ball; and brothers, Paul (Dorothy) Pence and his first wife, Edna, George "Butch" (Louise) Pence, Lawrence "Tom" (Mildred) Pence, Richard "Tub" (Amanda) Pence, and Robert "Bob" (Gladys) Pence. A Celebration of Life for Charles E. "Chuck" Pence will be held at a later date. Arrangements are being handled by Doan and Mills Funeral Home, 790 National Road West, Richmond. In lieu of flowers, memorial contributions may be made to a charity of the donor's choice. Condolences may be sent to the family via the guest book at www.doanmillsfuneralhome.com.

The family of Charles Eugene Pence created this Life Tributes page to make it easy to share your memories.