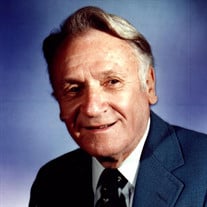 NAPLES, Fla. - It is with heavy hearts we announce the passing of Carl W. Kleinknecht on December 4, 2020, in Naples, Florida, at the age of 103, and honor his remarkable life. Carl was born August 10, 1917, in Richmond, Indiana, to C.A. and Charlotte B. Kleinknecht. He graduated from Morton (Richmond) High School, class of 1935, and then attended the College of William and Mary in Williamsburg, Virginia. Carl served as a radio operator in the Army Air Corps-15th Air Force during the Second World War. During a mission over Germany in July 1944, his plane was attacked. He was forced to parachute out and spent several weeks evading capture. Carl was eventually arrested and spent almost a year as a POW. He was awarded a Purple Heart. Like many of his generation, Carl understated his experiences during the war and his service to his country. After the war, Carl married Irene Krantz of Logansport, Indiana. They had a son, William C. Kleinknecht, and were married for 59 years. Carl joined the family business, Richmond Electric Co., Inc., upon his return from the war, eventually taking it over. He was Chairman of the Board when he retired in 1992. In Richmond, Carl served on the Board of Directors of First Federal Savings and Loan, was President and Life Member of the Board of the Boys and Girls Clubs of Wayne County, and was a member of First English Lutheran Church. He was also a member of the Sigma Alpha Epsilon fraternity and an associate member of Naples United Church of Christ. Soft spoken, but quick witted, Carl enjoyed playing tennis, first at Forest Hills Country Club in Richmond and then at Naples Bath and Tennis Club. He also enjoyed playing bridge. Carl is predeceased by his wife, Irene; son, William; and brother and sister-in-law, Richard B. and Eugenia Kleinknecht. He is survived by nieces and nephews in the United States and Canada. Carl’s family would like to sincerely thank the Glenview at Pelican Bay/Premier Place and Vitas Healthcare/Hospice in Naples, in addition to the Naples Community Hospital for all the loving care and support they gave him. A private graveside service for Carl W. Kleinknecht will be held at a later date. Burial will be in Earlham Cemetery. Memorial donations may be made to: Glenview Employees Scholarship Fund through the Community Foundation of Collier County, 1110 Pine Ridge Road, Suite 200, Naples, FL 34108. Condolences may be sent to the family via the guest book at www.doanmillsfuneralhome.com.

NAPLES, Fla. - It is with heavy hearts we announce the passing of Carl W. Kleinknecht on December 4, 2020, in Naples, Florida, at the age of 103, and honor his remarkable life. Carl was born August 10, 1917, in Richmond, Indiana, to C.A. and... View Obituary & Service Information

The family of Carl W. Kleinknecht created this Life Tributes page to make it easy to share your memories.

NAPLES, Fla. - It is with heavy hearts we announce the passing...