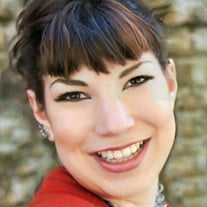 Our family’s star passed away unexpectedly Tuesday, March 29, 2022. Catie was an intelligent, vivacious, and talented young person. She was a fierce defender of those she loved and her close friends. Catie was also a loving cat mother and a skilled gardener. Born the day after Christmas in 1990, she grew up in Cambridge City, Indiana, graduating from Lincoln High School in the Honors program AND the vocational program. Catie attended Indiana University, graduating in four years with a degree in apparel merchandising. She was a talented seamstress and proudly wore the clothes she made to high school and college. During her sophomore year at IU, Catie opened Salon 221 and successfully operated the hair styling business (that she learned at Lincoln High School) while a student and several years after graduation. Catie was multi-talented. She played piano, guitar, and violin. Catie opened an art studio in Bloomington and sold many of her paintings, many which adorned the walls of Bloomington’s restaurants and pubs. She also did upholstery for several Bloomington businesses. Catie, being a regular at the Comedy Attic, out of the blue started to do stand-up comedy herself and won several prizes! She was a world traveler. Catie taught school in South Korea, was an au pair in Spain, and visited South America and Western Europe several times, as well as Canada, Cuba, and Taiwan. After working in Asia and Western Europe, she returned to America working as a mortgage banker in Detroit, Michigan, for several years and then returned to Indianapolis to work at PNC America. Catie packed a lot of life in her 31 years! During the past two years, her health deteriorated severely due to a neurological disorder. We will miss our beautiful, talented daughter, sister, granddaughter, cousin, and niece. She brightened our lives. Catie was predeceased by her maternal grandmother and grandfather, Pearl and Ernie Wilson and paternal grandfather, Thomas E. Taylor. She is survived by her loving mother, Tina K. Pradel of Richmond and father, W. Dean (Mary) Taylor of Bloomington, Indiana; brother, Ryan E. Taylor of Richmond; grandmother, Alma Naomi Taylor of Richmond; aunt, Mary (Allen) Copenhaver of Richmond; cousin, Elizabeth H. (Josh) Smith of Connersville, Indiana; uncles, Rod (Alicia) Wilson and Rick (Julie) Wilson; and many other cousins, as well. As per Catie’s wishes, there will be no public calling. There will be a private gathering of friends and family to honor and celebrate Catie’s life. Catie would wish, if one chooses, for you to donate to the animal shelter of your choice. We will miss you, Catie. You were the light of our lives.

Our family&#8217;s star passed away unexpectedly Tuesday, March 29, 2022. Catie was an intelligent, vivacious, and talented young person. She was a fierce defender of those she loved and her close friends. Catie was also a loving cat mother... View Obituary & Service Information

The family of Caitlin Anna May Taylor created this Life Tributes page to make it easy to share your memories.