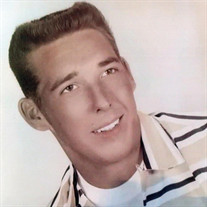 RICHMOND, Ind. – On Friday, September 10, 2021, Bobby Lee Jack Heigle, loving husband of wife, Donna and father of three, passed away from COVID-19 at the age of 83. Bobby was born on March 29, 1938, in Batesville, Arkansas, to Willie Jake and Nelsie Dill Heigle. He was raised by his mother and stepfather, David Hensley, who moved their family to Richmond when Bobby was 11 years old. He worked in the greenhouses at Hills’ Roses and at Debolt Concrete for 10 years before becoming a maintenance supervisor at IRC&D Trucking. Bobby was a master mechanic, who enjoyed a 20-year career as the chief maintenance supervisor with Reynolds Incorporated Industrial Waterworks. He retired from Ernst Enterprises in 2001. Bobby was a lifelong Teamster and National Labor Union member. In 1958, Bobby began his lifelong hobby as a drag racer and builder of hot rods. A grassroots innovator, he popularized drag racing at local tracks throughout the tri-state area. Bobby won many track championships throughout the 70s, 80s, and 90s, with a career total of over 300 eliminator event victories. He built the legendary “His” and “Hers” 55 Chevrolets, with his wife driving for the two-car team. In 1975, Bobby acquired his first Mopar, a 1967 Dodge R/T called “Old White”. This car would prove to be his most successful hot rod with over 200 class victories. Bobby had winning streaks where he and Old White were nearly unbeatable throughout a season. With the success of Old White, Bobby added many Chryslers to the stables and was known for his various creations of beautiful and fast cars. He loved taking obscure cars and turning them into performance autos. Bobby finished his racing career with a pair of Chevy powered AMC Ramblers, which are still raced today. He retired from driving race cars in 2013, due to vision loss. Bobby’s successful racing career is not what made him a local legend. He was first and foremost a champion friend and gentleman to all who knew him. Over an 83-year lifespan, Bobby was loved and befriended by everyone he encountered. A man is measured by the friends he made and the good deeds performed along life’s journey. Bobby Heigle was a fine man and a perfect example of America’s best generation. He will be terribly missed by all. Survivors include his wife of 59 years, Donna Jean Cruse Heigle, to whom he was married in June 1962; children, Darren Heigle of Cambridge City, Indiana, Kim Heigle of Richmond, and Brian Heigle of Chandler, Arizona; grandchildren, Chad Dailey, Ashley (José) Morales, Peyton, A.J., and Brody Heigle, Brea Giovanello, and Ava Thorton; great-grandchildren, Chanel “Suga Buga” Coffey, Jax Morales, and Kaelynn and Cason Dailey; sisters, Karol Lampton, Brenda Heigle, and Connie Hensley; nieces; nephews; and many friends. He was preceded in death by his grandfather, Jacob Heigle; daughter-in-law, Steffanie Quinn Heigle; parents; sisters, Willa Mae Longfellow and Lawanda Knox; and brothers, Ronnie Heigle and baby James Heigle. Visitation for Bobby Lee Jack Heigle will be from 4:00 to 7:00 p.m. Thursday, September 16, 2021, at Doan & Mills Funeral Home, 790 National Road West, Richmond. Funeral service will be held at 11:00 a.m. Friday, September 17, 2021, at Doan & Mills Funeral Home with Pastor James E. Slaven officiating. Burial will be in Crown Hill Cemetery. Memorial contributions may be made to: Reid Foundation, 1100 Reid Parkway, Richmond, IN 47374. Condolences may be sent to the family via the guest book at www.doanmillsfuneralhome.com.

The family of Bobby Lee Jack Heigle created this Life Tributes page to make it easy to share your memories.