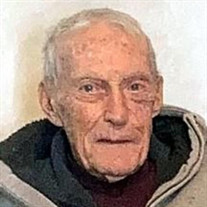 RICHMOND, Ind. – Billy R. Smith, age 88, of Richmond, Indiana, died Thursday, May 5, 2022, at Reid Health. Born October 16, 1933, in Whittier, California, to William and Hazel Hanagan Smith, Billy lived in this area most of his life. He graduated from Centerville High School and then served in the United States Navy from 1955 to 1961, part of that time in Korea. Billy was an Industrial Engineer, having worked at Nettle Creek Industries, Vandor Corporation, and lastly at Dolly Incorporated in Tipp City, Ohio until his retirement in 1997. He enjoyed golf, bowling, fishing, and spending time with his family. Survivors include his wife, Carolyn; son, Jack (Pam) Smith of Centerville; five grandchildren; twelve great-grandchildren; sister, Betty (Fred) Dickerson of Centerville; son-in-law, Roger Lindsey; nieces; nephews; cousins; and many friends. He was preceded in death by his parents; daughters, Robbin Lindsey and Terri Lohmoeller; and grandson, William Smith. Graveside services for Billy R. Smith will be Saturday, May 28, 2022, at 10:00 a.m. at Crown Hill Cemetery in Centerville. Arrangements are being handled by Doan & Mills Funeral Home, 790 National Road West, Richmond. Memorial contributions may be made to: Riley Children’s Foundation, 30 S Meridian St #200, Indianapolis, IN 46204. Condolences may be sent to the family via the guest book at www.doanmillsfuneralhome.com.

The family of Billy Ray Smith created this Life Tributes page to make it easy to share your memories.