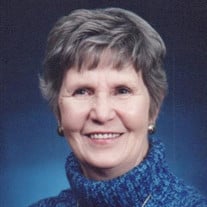 RICHMOND, Ind. – Betty “Jean” Blose, age 91, of Richmond, Indiana, joined her beloved husband, Donovan, Friday, July 16, 2021. She died at Arbor Trace. Born July 19, 1929, in Germantown, Indiana, to Jyle Nathan and Bernice Beard May, Jean was a life-long resident of Wayne County, Indiana. She graduated from Centerville High School in 1947. Jean retired from Reid Hospital in 1991, where she worked as a service representative in the business office for 20 years, beginning when the Medicare deductible was only $40 and a patient’s insurance paid for everything. She had previously worked at First and Second National Bank, both in Richmond, and as a secretary at Centerville High School. Jean was a lifetime member of Centerville United Methodist Church. She was also a charter member of the Fraternal Order of Police Ladies Auxiliary in Richmond, where Donovan served with pride on the Richmond Police Department for 23 years, retiring as captain. After retiring, Jean and Donovan began traveling anywhere and everywhere in the United States, wondering why anyone would want to travel elsewhere in the world when there was so much to see and do in their own backyard. They always took “off the beaten path routes” which led to some very interesting adventures. Jean loved working in the yard and spending time with her family. The highlight of each year for both Jean and Donovan was their annual “Christmas Roll Day” which was held close to Christmas. It was the one day each year when the whole family would join them at home to enjoy each other’s company and eat homemade cinnamon rolls. Jean also loved having her grandchildren and great-grandchildren come over one at a time for their “Special Day”. Some of the grandchildren lived too far away and didn’t get this time, for which she was sorry. Jean always said, “Children keep you young.” Survivors include her children, Susan (James) Bell of Centerville, Indiana, Gary Sheets of Lynn, Indiana, and Jeffrey Blose of Richmond; stepsons, Michael (Connie) Blose of Lawton, Oklahoma, and Patrick (Peggy) Blose of Fort Wayne, Indiana; grandchildren, Nancy Stapleton of Centerville, Heather (Scott) Berrier of Shirley, Indiana, Amy (JR) Smith and Jessica Blose, both of Richmond, Rebecca (Zach) Sherman of West Carrollton, Ohio, Stephanie (Mike) Maniaci of Covington, Ohio, and Benjamin Sheets of Dayton, Ohio; great-grandchildren, Hanna, Jillian, Ladaya, Evelynn, Tobias, Alexander, Cody, Jordan, Autumn, Mariah, Kaylyn, Sutton, Grant, Colt, Troy, and Reid; three great-great-granddaughters; sisters, Patricia May of Centerville and Carolyn May-Sbarge of Richmond; brother, Robert May of La Grange, Kentucky; sister-in-law, Bernie Blose of Richmond; brother-in-law, Max (Sally) Blose of Waco, Texas; nieces; nephews; cousins; and many friends, including special friend, Dr. James Hayes, who kept Donovan and her going for many years. She was preceded in death by her husband of 47 years, Donovan Rex Blose, who died October 30, 2007; stepson, Mark Blose; daughter-in-law, Kristy Sheets; grandson-in-law, Charlie Stapleton; parents; sister, Gracia Ann Nitzsche; brother, James May; sister-in-law, Marti May; and brother-in-law, Phillip Blose. Visitation for Betty “Jean” Blose will be from 10:00 a.m. to 12:00 p.m. Thursday, July 22, 2021, at Doan & Mills Funeral Home, 790 National Road West, Richmond. Funeral service will follow at 12:00 p.m. Thursday, July 22, 2021, at Doan & Mills Funeral Home with Rev. James Girdley officiating. Burial will be in Crown Hill Cemetery. Memorial contributions may be made to: John Hennigar Lodge #63 (FOP), P.O. Box 423, Richmond, IN 47375 in memory of Donovan R. Blose or Centerville Youth League, 100 Temple Drive, Centerville, IN 47330 in memory of Charlie Stapleton. Condolences may be sent to the family via the guest book at www.doanmillsfuneralhome.com.

The family of Betty "Jean" Blose created this Life Tributes page to make it easy to share your memories.