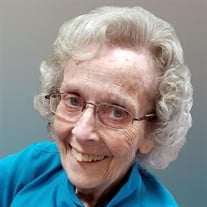 CENTERVILLE, Ind. – Alberta Hale Van Winkle, age 84, of Centerville, Indiana, died Monday, May 10, 2021, at home surrounded by her family. Born January 19, 1937, in Johnetta, Kentucky, to Virgil and Jocie Allen Hale, Alberta moved to Wayne County, Indiana, in 1953. She worked at Frisch’s, Belden, Elder/Wilbert Corporation, Vandor Corporation, and J.M. Hutton. Alberta was also a nurse’s aide at Jenkins Hall and Reid Hospital, and she worked as a mailroom clerk at Reid Hospital. After retiring, Alberta served as a greeter at Eastern Indiana Orthopaedics, Inc. She was a faithful member of Freedom Missionary Baptist Church and was one of the founding members in 1968. Alberta taught Sunday school for many years and was a volunteer helper at Vacation Bible School. She read through the entire Bible every year, sometimes more than once. Alberta loved to share Jesus with others and gift them with her hand-crafted items. She enjoyed cooking, canning, crocheting, sewing, quilting, and fishing. Alberta also loved spending time with her family and friends, including preparing meals and feeding them at her table. Survivors include her husband of 69 years, Russell K. Van Winkle; children, Kenneth (Gail) Van Winkle and Gwendolyn (Charles) McGill, both of Centerville; grandchildren, Nathan (Amanda) Van Winkle, Rachel (Candice) Moschell, Lukas McGill, Russell (Ada) McGill, Clinton (Lexi Newman) McGill, and Noah Fox, who was like a grandson; great-grandchildren, Audrey and Olivia Van Winkle, Thaddeus, Abraham, and Fitzgerald Moschell, Aiden McGill, Emma Edelman, Silas James, and Isobel McGill; stepsister, Jallie (Duane) Crabtree; aunts; several cousins; and many friends. She was preceded in death by her father; mother, Jocie Allen Hale Clark; and brother, Finley Ray Hale. The family would like to thank Alberta’s sister-in-law, Ruth Thacker, who held her hand and cared for her and Reid Hospice for the loving care they provided to Alberta. Visitation for Alberta Hale Van Winkle will be from 11:00 a.m. to 1:00 p.m. Thursday, May 13, 2021, at Freedom Missionary Baptist Church, 794 South Round Barn Road, Richmond. Funeral service will follow at 1:00 p.m. Thursday, May 13, 2021, at Freedom Missionary Baptist Church with Pastor Brian Hamilton and Pastor Dennis Wagers officiating. The service will be live streamed at www.facebook.com/FreedomMBC/. Burial will be in Crown Hill Cemetery. Arrangements are being handled by Mills Funeral Home, 405 East Main Street, Centerville. In lieu of flowers, memorial contributions may be made to: Reid Foundation for the Hospice Program, 1100 Reid Parkway, Richmond, IN 47374 or Freedom Missionary Baptist Church, 794 South Round Barn Road, Richmond, IN 47374. Condolences may be sent to the family via the guest book at www.doanmillsfuneralhome.com.

The family of Alberta Hale Van Winkle created this Life Tributes page to make it easy to share your memories.