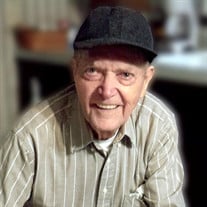 NEW PARIS, Ohio – Albert D. “Al” Jennings, age 92, of New Paris, Ohio, died Saturday, January 29, 2022, at Kettering Health. Al was born September 26, 1929, in Milton, Indiana, to Daniel Jr. and Edith Baker Jennings. He lived in New Paris since 1955. To help his family make ends meet, Al began working at the age of 14 in Cambridge City, Indiana. He liked to tell the story that he lied about his age to get the job. Al was a hard worker and was employed at Perfect Circle in Richmond, Indiana, for 37 years, where many of his friends and coworkers called him "Abby". He retired from PC in 1992, but continued to put his work ethic and skills to use as a handyman. Prior to joining PC, Al worked a variety of jobs, including a chair factory in Cambridge City, the Bertsch Foundry in Cambridge City for 11 years, Foust Nursery, the Pennsylvania Railroad, and Kessler Funeral Home in New Paris for 15 years. Al was a sportsman and coached little league baseball for 15 years in New Paris and Centerville, Indiana. He helped start the New Paris Booster Club. Al bowled with many teams throughout the years and enjoyed playing the lottery. He enjoyed watching his grandchildren play sports, watching sports on TV (in particular, the Dodgers), reading Western novels (especially, Louis L’Amour), and eating homemade cherry pies. Al liked playing cards such as poker, Euchre, and Spades - always seeming to win, he was the one you wanted as a partner. Al loved the lake. He purchased a ski boat in the 1970s and made countless trips to the Ohio River, Brookville Lake, and Dale Hollow Lake. Throughout the decades, Al taught nearly 100 people how to water ski. He water skied until the age of 75, a memory his family will aways cherish. Al was a wonderful storyteller. He seemed to have a story for every occasion. His grandkids and great-grandkids will miss those stories and the connection to their heritage. Al’s survivors include his daughter, Marlenia Kay (Jay) Troutwine of Richmond; sons, Randy Jennings of Richmond and Bruce (Stephanie) Burke of New Madison, Ohio; daughter-in-law, Treasa Jennings of New Paris; grandchildren, Jason (Heather) Troutwine, Jeremy (Nicole) Troutwine, Joshua (Kacey) Troutwine, Daniel Jennings, Kayla Burke, Candace (Jason) Lee, and Sean Jennings; 10 great-grandchildren; brother, Bobby Jennings of Richmond; and many friends, including his special companion, Joan Jones. He was preceded in death by his sons, Daniel Jennings and David Jennings (Treasa); parents; and sister, Clementine Lawrence. In lieu of a public service or flowers, the family asks friends to consider making a gift to the Eugene and Marilyn Glick Eye Institute at the IU School of Medicine Department of Ophthalmology (https://medicine.iu.edu/ophthalmology/giving) or a charity of their choice. Condolences may be sent to the family via the guest book at www.doanmillsfuneralhome.com.

The family of Albert D. "Al" Jennings created this Life Tributes page to make it easy to share your memories.